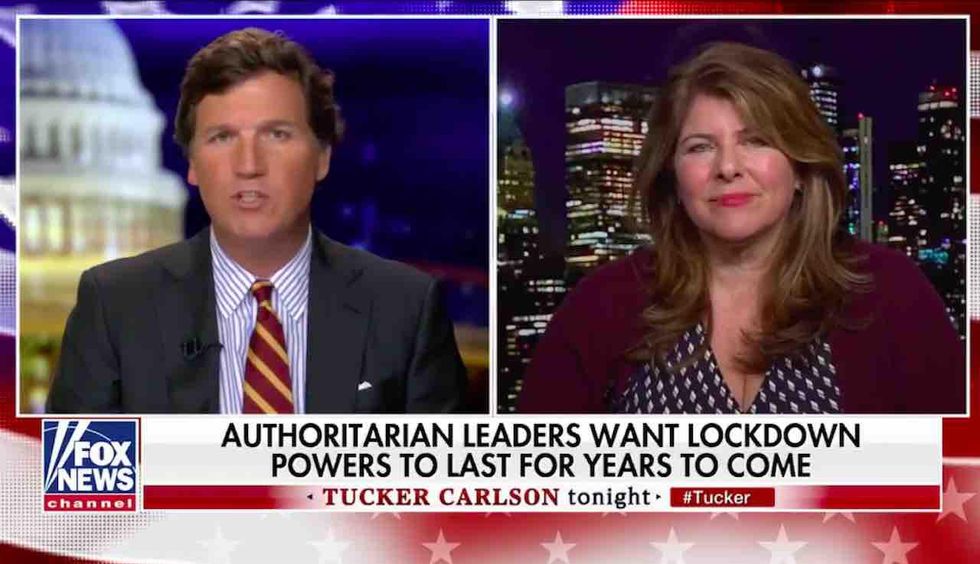 As Fox News host Tucker Carlson told left-wing author Naomi Wolf on his program Monday night, there isn’t a whole lot they likely agree on — but Wolf’s alarming observation that America is turning into a “totalitarian state before everyone’s eyes” amid our government’s coronavirus lockdowns is certainly an exception.

Just days after last November’s presidential election, Wolf famously tweeted that had she known that now-President Joe Biden was open to “terrifying” lockdowns that “won’t ever end because elites love it,” she never would’ve voted for the Democrat:

If I’d known Biden was open to ‘lockdowns’ as he now states, which is something historically unprecedented in any p… https://t.co/nqjSqGvGWv

But Wolf told Carlson that she’s been writing about governmental overreach for a long time, and in fact penned a 2007 book on the subject — “The End of America: Letter of Warning to a Young Patriot” — that can apply to the “terrible crisis that we’re in” right now.

What else did she say?

Wolf, an adviser for former President Bill Clinton’s 1996 re-election campaign, said America is quickly “moving into a coup situation, a police state situation” as elected officials continue to assume “unprecedented” emergency powers under the “guise of a real medical pandemic.”

“That’s not a partisan thing; that transcends everything that you and I might disagree or agree on,” she told Carlson. “That should bring together left and right to protect our Constitution.”

Wolf observed that the “state has now crushed businesses, kept us from gathering in free assembly to worship as the First Amendment provides, is invading our bodies … which is a violation of the Fourth Amendment, restricting movement.” She noted that she can be fined $15,000 a day in New York state for gathering more people in one space than COVID-19 restrictions allow.

Noting that her historical studies have shown her that “would-be tyrants always take” the same 10 steps “when they want to close down a democracy,” Wolf told Carlson she believes the United States is “absolutely moving into what I call step 10,” which is the “suspension of the rule of law — that’s when you start to be a police state, and we’re here. There’s no way around it.”

Wolf added that she’s interviewed “many patriots from all backgrounds and all walks of life who are horrified” by this dangerous shift, but the deep divisions in our country make it difficult to stand united against the march toward greater governmental control.

She added that she’s seeing “autocratic tyrants at the state and now the national level … creating a kind of merger of corporate power and government power, which is really characteristic of Italian fascism in the ’20s” — and that they’re “using that to engage in emergency orders that simply strip us of our rights: rights to property, rights to assembly, rights to worship, and all of the rights that our Constitution guarantees.”

‘No one gives up emergency powers willingly’

Wolf also offered some sobering predictions, noting that her studies have shown that “no one gives up emergency powers willingly” and that they “always drag it on and drag it on.” She also said that “nowhere in the Constitution does it say” that our rights “can be suspended if there’s a bad disease. We have lived through typhus, cholera, small pox, HIV, tuberculosis, polio, the Spanish Flu … we’ve lived through an attack on our soil. Never have there been months and months and months of emergency powers when we weren’t actually fighting a war.”

She sounded the alarm concerning the “completely unprecedented” response to COVID-19, saying that “lockdowns have never been done before in free societies, and really, we’re turning into a version of a totalitarian state before everyone’s eyes.”

“I really hope we wake up quickly,” Wolf concluded, “because history also shows that it’s a small window in which people can fight back before it is too dangerous to fight back.”

Carlson wondered, too, if the powers that be want to keep Americans “divided so we won’t have conversations like this.”