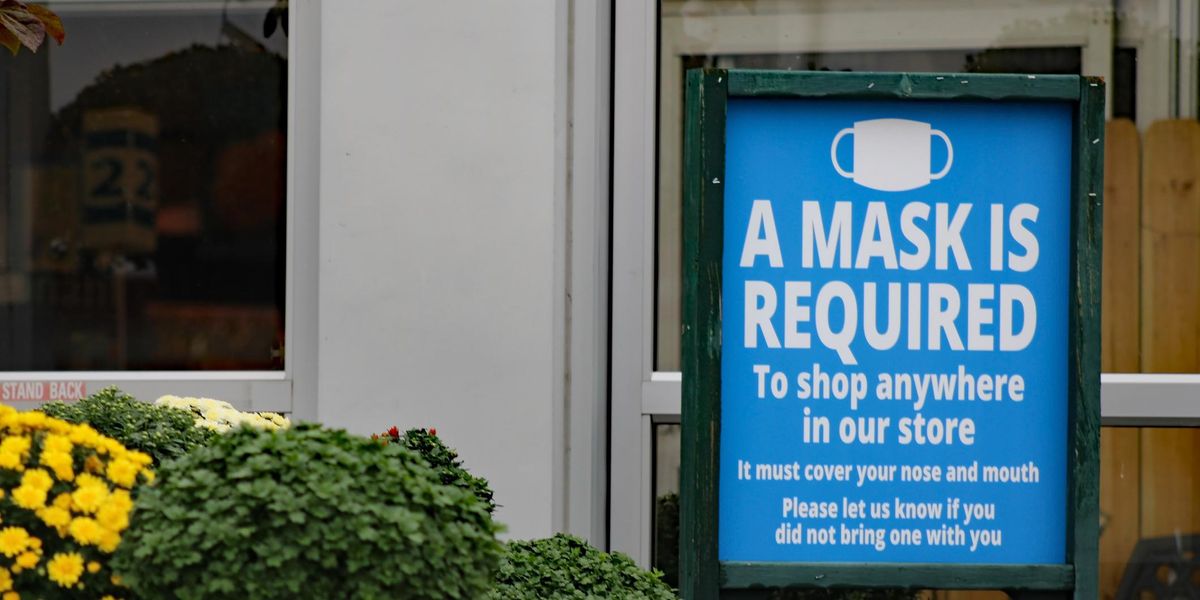 One hundred days of Biden’s mask-wearing have come due, and they have failed miserably to alter the natural trajectory of the virus. The time has come for lawsuits against the demonic mandate that 2-year-olds wear masks on planes, forcing the government during legal discovery to produce a morsel of evidence that masks make a difference even with adults.

Given that COVID fascism and mask-wearing are a cult, its practitioners will never admit that the viral spread is 100% natural, seasonal, and geographical and that it will continue until every country reaches immunity. But given the terrible physical and psychological consequences of these policies, it’s important for us to remind ourselves that they were all pain and zero gain.

Argentina did everything “right,” according to the public health “experts.” The country had one of the earliest and most draconian lockdowns, a mask mandate in place since April 14, and even forced cremation of some of those who died from the virus against the will of Jewish residents who asked for a proper burial.

Argentina, like many of the countries around the world that barely experienced any virus deaths during the first few months of the pandemic, thought that its draconian policies enabled the country to dodge the bullet. But when spring turned into summer, the population began experiencing growth in cases that later intensified, as we have seen in many countries that first escaped the virus. Argentina was praised by the liberal media for following the science and imposing a “strict COVID-19 lockdown,” which “saved lives.”

Given that Argentina had only one major wave, it was due for at least one more robust round, like every other country has had. The “virus is gonna virus” until populations reach herd immunity, like what happened in England and most parts of the U.S. All the places that “defeated” the virus are now having to defeat it again; all the places that did better than those hit first are now doing worse. It’s all natural and has nothing to do with human intervention. Some people might have forgotten about the trajectory of cases in Argentina, but the inimitable Ian Miller is here to remind us:

Argentina was one of the earliest countries in the world to mandate masks, back on April 14th, when cases were incr… https://t.co/FQ83B9If5t

The bottom line is that Argentina is a large country and could not escape the full spread of this virus, just like California, where officials erroneously thought they had defeated it through the voodoo of non-pharmaceutical interventions. Yet, as hospitals began to fill up, the Argentine government doubled down on failure, as President Alberto Fernandez declared that the previous restrictions were “insufficient.” He therefore announced limited travel during nighttime hours because, of course, the virus spreads more at night. Now, watch Argentina catch up to the herd immunity level of other countries as this wave spreads undaunted by the power grabs, yet he will credit those measures for the inevitable decline in cases that always follows a sharp increase.

Then, of course, there is India. During December, as most of the world was experiencing its large winter wave of the virus, India barely had any spread after experiencing a large spread over the summer. The WSJ published an article on Dec. 30 titled, “COVID-19 was consuming India, until nearly everyone starting wearing masks.” You know, because we’ve never seen any place in America with everyone wearing masks that suffered from the virus! NPR hailed India’s success in enforcing mandates on outdoor joggers by stationing police outside to hand out fines.

Well, like every other place in the world, masks “worked” until it was time for natural seasonal spread in that given area. Yes, India, given its massive share of the world’s population, had relatively few cases for the first year of the pandemic. Which is why it had the greatest spread of any country when it was time – because there was so much new ground unprotected by herd immunity for the virus to target.

Now, let’s put aside the fact that much of India already had a strict mask mandate early last year and still experienced a first wave. As Ian Miller shows, India suffered a 1,400% increase in cases since the Wall Street Journal quoted Indian health officials as crediting their universal mask mandate for stopping the spread. However, they will never follow up on their drive-by reporting. In each case, the media credits periods of lack of spread to mask-wearing, but then forgets about the masks when the virus spreads with a vengeance. Then, when cases inevitably come down again, it’s the masks, or perhaps more recently, the vaccines.

In reality, it’s an all-natural phenomenon. In California, where the virus spread prolifically in the late fall/early winter despite the earliest lockdown and mask mandates in America, the virus had already peaked before a single vaccine was administered:

While the vaccines appear to be very effective, they simply came too late to have made much of a difference in the… https://t.co/Ll00Dy8n4a

Let’s now travel farther east than India, and we will discover the fact that, for whatever natural reason, the virus has barely spread for the first year. Which is why the Far East is the world’s new hot spot. There are few people there with immunity.

You have to hand it to the media that they’re so effective at memory holing when they credit masks for keeping case… https://t.co/lfM32Ym6RV

Japan is part of the Far East surge this spring. The Japanese have been hailed for months for their “mask culture” even predating this virus. You’d be hard-pressed to find people more disciplined about wearing masks than the Japanese. Well, it “worked” until it didn’t.

So Japan’s 7-day average is now nearing the highest level it’s been over the past year, despite 98% mask compliance… https://t.co/8dKgUhMCXF

But we need not travel around the world to discover the obvious fact that it is natural phenomena, not human interventions, that are driving the cyclical and geographical spreads. All the experts warned that there would be catastrophe when nearly half the states got rid of their mask mandates, beginning with Texas and Mississippi two months ago, especially with the supposed new mutant variants. Yet at the same time, it was the northeastern states that spread much more severely as cases plummeted in the southern states and other non-masked states.

How many more weeks of hospitalization data from Texas will it take for experts and media and Twitter personalities… https://t.co/REcTW1eJTD

Remember how lifting mask mandates was neanderthal thinking and was going to cause huge spikes in cases, then the e… https://t.co/dpnuSNIthn

Gee, why do you think the most recent spread all happened to be clustered in the Mid-Atlantic states? No mask mandates? Well, in these states, people are wearing them even outside. It doesn’t take Sherlock Holmes to discover that this is all natural based on timing and geography.

As WalletHub found in a recent analysis ranking the 50 states and D.C. by stringency of restrictions, there is simply zero correlation between stringency and outcomes with the virus. Our government succeeded in locking down everything but the virus.

In reality, lockdowns and masking were just as logical before the vaccine as afterward. Which is why Biden is still pledging to wear his mask outdoors. This was always about the cult of control. Likewise, it was always known that schoolchildren were never major vectors of spread. Now that new emails between the CDC and the teachers’ unions have come to light, it is clear that the CDC knew this fact as well but allowed the teachers’ unions to rewrite its February guidance to limit its categorical advice of returning to in-person instruction.

Just like with the Jonestown Cult in the 1970s, an entire society has been programmed to commit suicide based on illogical faith in idols and fear of fellow man rather than embrace grounded common sense. Now that Fauci has been exposed as the Jim Jones of our time, how many will continue drinking the Kool-Aid?